A brief disclaimer before reading this article – I am in no way a policy maker or public service practitioner in the Netherlands, I decided to write this blog to share my experiences of Dutch public services during the past six months from my perspective as a resident in the city of Leiden. Furthermore, the governmental structure of the Netherlands is significantly different to that of the UK. Unlike the UK, local government in the Netherlands is largely funded centrally from grants with some supplementary local taxes such as water and dog (yes dog) taxes.

Nevertheless, in the spirit of sharing best practice, there are certainly some excellent services and initiatives in the Netherlands which UK practitioners could easily learn from and build upon. This post is will examine three such initiatives.

I will start with a big one, during my two years working as Communications and Engagement Manager for iNetwork and iStandUK, I lost count of the number of times heard civil and public servants alike lament the lack of a unique citizen identity number in the United Kingdom. The advantages of implementing such a number are numerous but the most significant one would be the breakdown of public sector silo working and the increased provision of holistic citizen support this would enable.

In 2007 the Dutch government introduced their own unique personal identifier number the  Burgerservicenummer (BSN). The BSN is used universally in the administration of all public services in the Netherlands from hospital and GP care to tax collection, student loans and welfare payments. According to the Dutch government, citizens and residents can “use your BSN for any government service in the Netherlands. You do not have to provide your data to each different government organisation – they can find it using your BSN.” This is a marked contrast to UK government services where (often different) personal details are held and maintained by numerous different agencies, often with different unique personal identifiers such as NHS numbers or national insurance numbers.

The approach taken to mitigate the data protection concerns seems to one based largely on the personal responsibility of the citizens. When receiving my BSN from the town hall in Leiden, I was warned repeatedly and explicitly to memorize my BSN and not share it with anybody under any circumstances. One adviser i spoke told me that even providing a BSN to potential employers or banks should only be done after great consideration and confidence in their legitimacy.

You might be wondering how, with all the secrecy and wariness, such a system function efficiently. The answer is that the BSN was introduced simultaneously with a two or three-step digital identity verification system (DigiD), which acts as a digital passport for all government agencies. This authentication ranges from username and password and SMS authentication to a pin protected app complete with QR code scanning.  From my understanding, it is the complexity and/or sensitivity of the service a citizen interacts with which determines the level of digital identity verification required. 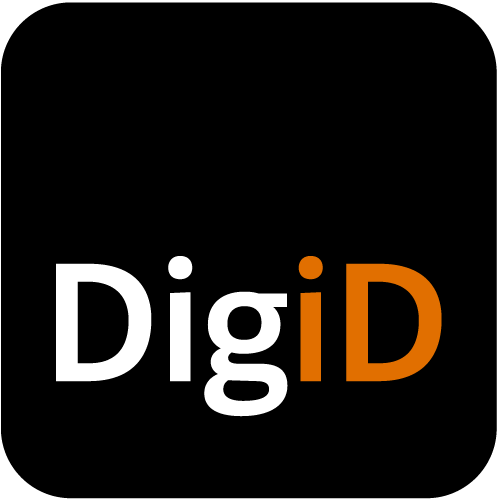 Is there any issue more universal to local public service provision than how to efficiently and ecological dispose of household waste? To address this age old challenge, several Dutch municipalities have developed the innovative solution of smart underground containers. Introduced in most major cities in the Netherlands, the smart underground containers with passes represent an integral part of the smart city agenda. Doing away with traditional bins for individual households or buildings, the underground container system uses a zonal or neighbourhood system in which every household is assigned a container, usually within a five minute walk, and given an electronic pass card. 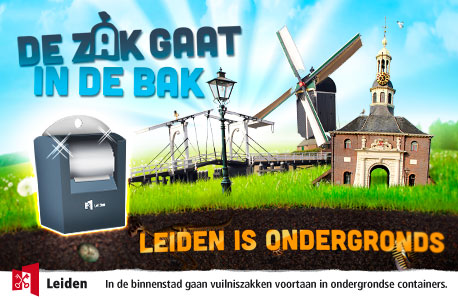 It is hard to imagine such a system being practical in remote or rural areas without each household having their own underground container, which would defeat the point of course. In densely populated and urban areas, however, the advantages of this system are numerous.

The first advantage is obvious; removing the obligation of the local to provide and replace damaged or stolen bins for every household represents significant savings. On top of this, the smart containers are capable of indicating to a central control when they are almost full, meaning bins never overflow and partially full bins need not be collected.

Another advantage of this system is that household waste has been greatly reduced as an issue of public health and concern. With large bins available 24/7, fly-tipping and disposal of household waste in public are virtually non-existent issues.  An added advantage of this is that pests are less attracted to populated areas. In the coastal areas of the Netherlands, and in South Holland where i am living, the main issue was seagulls being attracted to exposed household waste, but in moving the waste underground, there is the potential for equally effective reductions in other issues from urban pests such as rodents and foxes.

Creating a vibrant workplace that inspires both public servants and visitors is another topic which is high on the agenda for my public services providers, particularly local authorities. With some brilliant exceptions such as Rochdale Council’s Number One Riverside, many council buildings in the England remain in ageing and austere buildings which are too often unwelcoming and confusing places to visit for residents.

In the Netherlands there is a growing acknowledgement in both the public and private sectors that investments in improved working environments can lead to significant long term savings and productivity and staff welfare. What’s more, a vibrant and welcoming office can be a real asset for resident engagement and support for local authorities. My experience at the Leiden Stadhuis (town hall) was a real eye opener in this regard. A large open plan courtyard flooded with natural light and interior indoor plants greets incoming residents and a central information point is the intuitive first point of call for every enquiry. From there a simple number system allocates enquiries to individual help desks manned by friendly and multilingual advisors. The main courtyard also offers comfortable workspaces for public servants and residents.

Still unsatisfied with the current design, the local authority are planning significant refurbishments to the stadhuis to further increase the building’s environmental sustainability and its ability to act as a professional hub and community focal point. Below are two concept images from the renovation project.

On the surface, large-scale investment in public buildings may seem frivolous in times of austerity, but, as the Dutch case shows, such investments can be acts of genuine venture capitalism, improving the outcomes of citizens, public servants and communities alike. 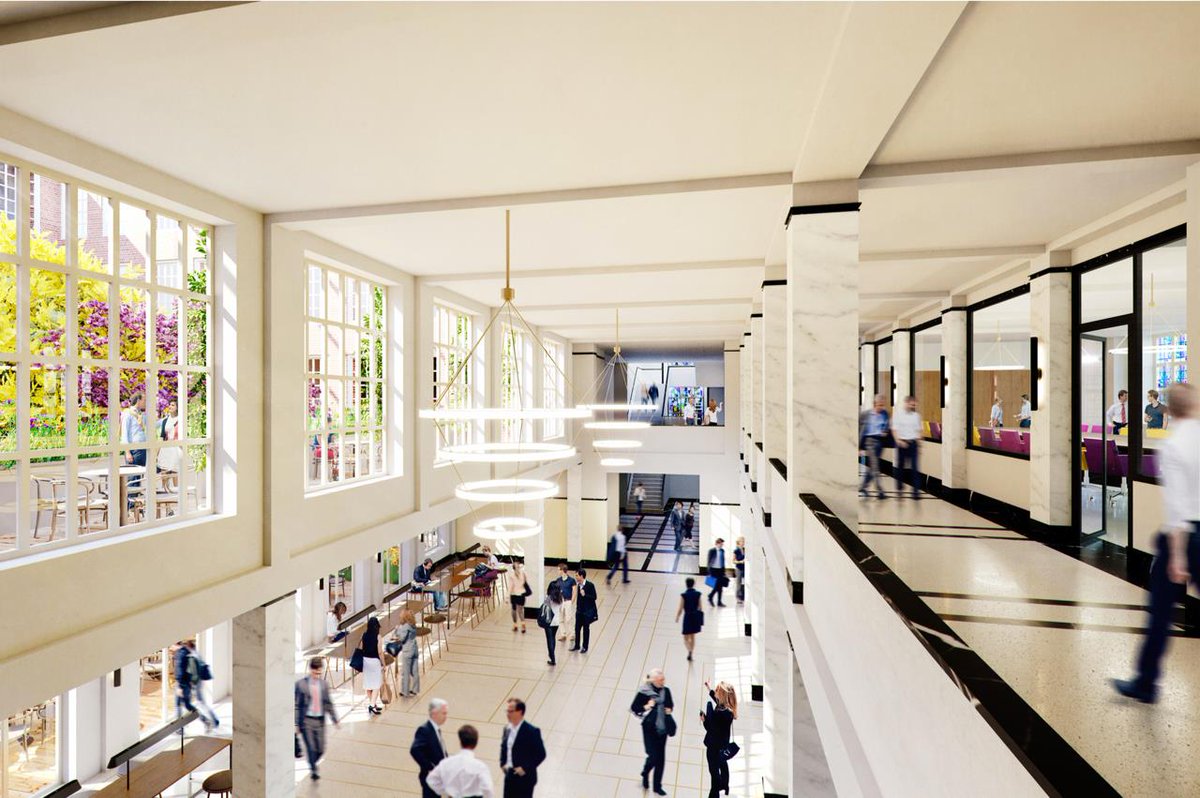 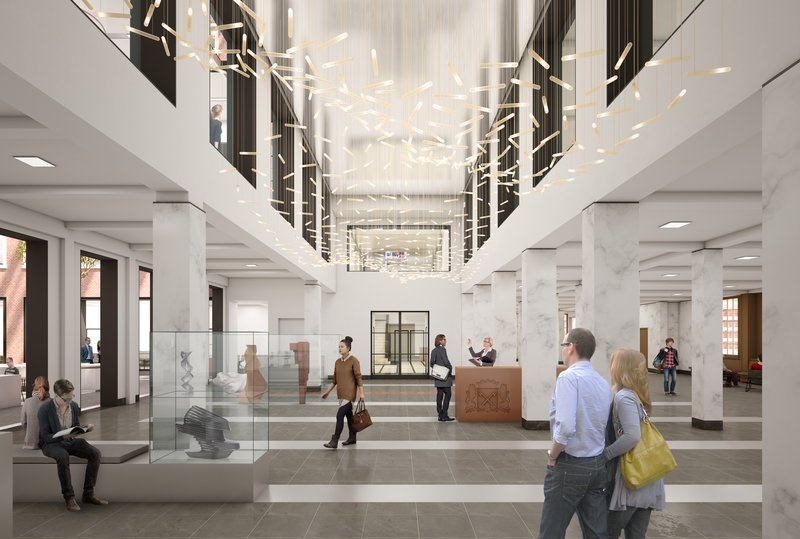 For more information about these projects please contact louis.stockwell@tameside.gov.uk