Data to Insight is a national initiative funded by the Association of Directors of Children’s Services, the Department for Education, and Ofsted. Its goal is to help local authorities make better use of data, and its operating model is to crowdsource and independently develop data tools which can be easily shared between local authorities.

The COVID-19 Demand Modelling Tool is a new product designed to help councils prepare for changes in demand for services in the wake of  national and local lockdowns. Moving from prototype to live deployment in two months, the project demonstrates an innovative approach to data tool development in the public sector in two key ways:
– Pairing dedicated developer time with broader input from separate categories of collaborating local authorities.
– Designing for sharing, with portability at the heart of the design, so that all England’s local authorities can benefit from a single development project

When the COVID-19 pandemic hit at the beginning of this year, it created a situation no-one was prepared for. Local Authority children’s services departments urgently needed to begin modelling different scenarios, so that they would be able to plan for resourcing and protect their budgets — and this had to be simple for them. They needed to answer questions like:
‘How much of the ‘drop’ in demand due to lockdown would end up coming back later, and when?’
‘Will there be a second lockdown?’
‘What will the new normal look like after lockdown?’

Some Local Authorities responded by developing their own models. Kent, for example, developed a robust, referral-focused data model which was shared widely. Many others, however, struggled without the capacity to build something themselves. Our team — made up of members of GMCA, the Data to Insight network and Social Finance — spotted an opportunity: To bring together all of the work being done independently by Local Authorities and build a shared tool, that would be available to all, thereby supporting those who did not have capacity to build a tool themselves.

The tool was developed to work with the standard “Annex A” datasets which every local authority already produces in readiness for Ofsted inspections: to use it, all they need to do was download the tool, paste in three existing lists of data, and then start tweaking parameters to fit their local context. We piloted a new engagement approach that enabled us to engage with a community of developers, stakeholders and end users, each of whom had different levels of knowledge of the tool and investment in its development, and demonstrated a development approach which fully exploited the potential of the Data to Insight network to turn standard data outputs into open, shareable data tools. One piece of work benefits many local authorities.

PACE AND RESPONSIVENESS: After two months of rapid iteration, the Social Finance team launched the COVID-19 Demand Modelling tool to assist local authorities in modelling different scenarios for their referrals, CPP caseloads and CLA caseloads, which has since been offered free of charge to all English local authorities. The project demonstrated the benefit of innovative financing arrangements with MHCLG, enabling rapid commencement, combined with strong, collaborative networks of local authority partners and supporting organisations, ensuring a high quality product. It also demonstrated the benefit of providing a dedicated development resource to work at the direction of the collaborating local authority stakeholders. NEW FEEDBACK LOOPS: At the centre was a core development team of analysts from Social Finance and Data to Insight, responsible for building the tool and setting priorities on a weekly basis. This stable, focused group always had feature design and implementation in their sights. They were also responsible for synthesising the other feedback heard, allowing for rapid turnaround in quick sprints.

In the next layer were two local authorities who agreed to be regular testers and were reached out to multiple times during development. Their familiarity with the tool became an asset and allowed swift testing of new features. Outside this layer were a group of approximately 10 local authorities who each provided user experience feedback once during the process. Their ‘fresh eyes’ perspective provided the core team with regular insight into how the tool would land with its intended audience — Local Authorities who would be seeing the tool for the first time — upon release.

In the final layer are the 151 local authorities connected to Data to Insight’s distribution network. By embedding development within this network, it should be possible to achieve a rapid take-up of the tool upon launch. By facilitating regular interactions between these layers we cultivated a sense of shared ownership of the project between developers and users. This was particularly useful given the time-sensitive nature of the project, as it meant we could reach out to a wide range of stakeholders at any one time. This resulted in feedback iterations that took days, rather than weeks, to complete.

ECONOMIES OF SCALE: The project also demonstrated the clear benefits of collaborative working in this space: with relatively little investment, tools which are helping one local authority can be “mainstreamed” and made available to all local authorities, without significant resource implications for the originating local authority. IMPACT OF THE TOOL ITSELF: Having been downloaded by over 50 of our colleagues in different local authorities, and with a design philosophy focused around making the core concepts of this kind of data modelling accessible to colleagues who might be unfamiliar with these concepts, the tool serves as an introduction to working with predictive models. It helps local leaders put indicative numbers against their predictions of how demand and service provision might change locally in the wake of COVID-19. And, because it’s provided on an open license, it gives local authority analysts a malleable tool that they can investigate and tweak to help build out their local toolkits.

Working together on common tasks provides economies of scale. There are plenty of things every council needs to do for itself – including, of course, understanding their local contexts. But, instead of 151 analysts in 151 local authorities separately preparing their data for predictive modelling (if they can even spare the time), we can do that kind of work once for the whole set, and let those 151 analysts spend their time actually using the data instead. With minimal investment we can work together to produce tools which few local authorities could afford to produce individually.

Things change during development – and close, agile collaboration helps us adapt to those changes. By engaging a wider community of users in development, we had an audience that were engaged in the product before release. The prioritisation process also made us sensitive to changing underlying user needs. For example, the impact of children returning to schools on school referral volumes may have been the key driver for the tool’s creation, but a month into development, local authorities were increasingly concerned with the impact of lockdown on social worker caseloads in the medium to long-term. This resulted in a pivot in the overall focus of the tool, from predicting CS referral volumes to modelling the impacts of lockdown on the numbers of open Child Protection Plans and children in care. Additionally, as time went by, prospects of a second lockdown loomed ever closer. Users made it clear that the ability to forecast the impacts of future lockdowns would be key to ensuring the tool’s longevity. It was only due to close engagement with a broad feedback community that the core development team could feel confident in making such significant changes in feature prioritisation. It has (hopefully!) resulted in a tool with greater long term use potential that was laid out in the project brief. You can’t be all things to all people.

We put a significant focus on ensuring the model was easy to understand for a first-time user, and that it could be tailored to the needs of any local authority. We knew that we weren’t trying to make the best model for a single local authority, but instead make a model that could inform decision making in any area it is used. The result is that any local authority can get started modelling demand for services, without having to do the data development work by themselves. However, not every local authority wants to do this work, and we could have spent time working to attract those unlikely users at the expense of increasing the tool’s value to our core customers – those dozen or so local authorities who wanted the tool enough to volunteer to test it. In future, we’ll use this learning across  Data to Insight network to foster individual but overlapping communities, knowing that each of our tools is useful to someone, without any of them needing to be useful to everyone.

COVID-19 and the associated impact of lockdown has disproportionately impacted the most vulnerable members of our society, as do almost all hardships. In a time when councils are struggling to balance budgets, and experiencing dips in social care activity due to children becoming “invisible” to the usual safeguarding routes, this work helped local authorities protect their social care budgets ready for demand to return post-lockdown.

The way we did it, using one central development team to deliver on the requirements of multiple beta testing local authorities, for the benefit of dozens of local authorities who wouldn’t otherwise have had the resources to produce this kind of work locally in the required timescales, both saved councils time and money during a time of unprecedented constraint, and enhanced their ability to put indicative numbers against their gut feelings, in ways that many councils hadn’t previously done. 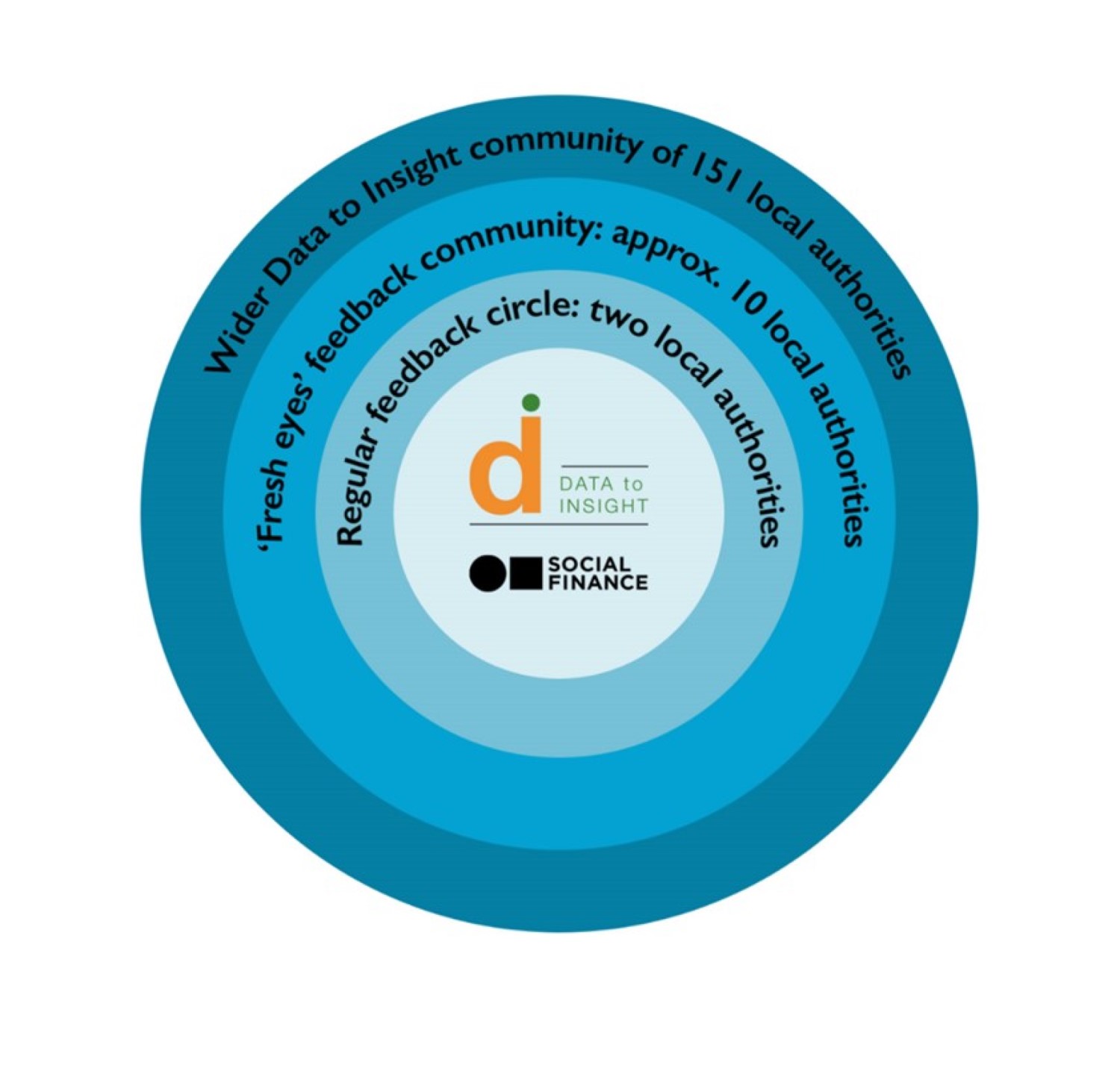