“Advice and Guidance” in Mental Health for GPs

Mental health problems in the general population have been rising for many years. About 1 in 6 people in the UK suffer from a common mental health condition such as anxiety or depression at any one time (McManus et al. 2016). At the same time, mental health spend accounts for only 11% of the NHS budget despite causing 23% of the disease burden in the UK (The King’s Fund, 2015). The NHS also has a shortage of consultant psychiatrists, and has struggled to attract and retain junior doctors who want to specialise in psychiatry (Royal College of Psychiatrists, 2017). Whilst this is starting to improve, the length of time needed to train a consultant psychiatrist means that it will be some years before we start to see the impact of this improvement.

Most people with mental health conditions in the UK receive appropriate and effective care from their GPs but in some cases, patients with more complex mental health needs need specialist care from Mental Health services. However, waiting lists are lengthy due to the rising pressure on specialist services, and it may be months before patients receive the necessary treatment.

Therefore, with the rising demand for Mental Health services, and decreased resources to meet this need:

1) Patients who need care and treatment from specialist Mental Health services are waiting longer to see a consultant psychiatrist.

2) GPs are having to see and treat more people with more complex mental health needs in primary care, whilst they wait for specialist treatment.

In many cases, the GP may be able to provide some specialist treatment to “medium complexity” patients with some direct advice from a consultant psychiatrist. Until recently, there hasn’t been a quick, easy, and structured way to access the specialist advice, and the only way of doing this would be to put in a referral to specialist Mental Health services. This route of making a formal referral can be a lengthy process. The “Advice and Guidance” (A&G) system is a solution to this problem. A&G is a secure electronic messaging platform which allows GPs to send a message to a consultant psychiatrist in specialist Mental Health services. The process is as follows:

1) GP sees a patient who has a mental health condition of medium severity i.e. where the GP would benefit from some specialist advice, but where the patient doesn’t necessarily need the input of Mental Health services.
2) GP opens the electronic patient record and sends a brief query to a consultant psychiatrist requesting specialist advice using the A&G button.
3) Consultant psychiatrist receives the query via secure email, and responds to GP via the system in the agreed timeframe (currently ten working days).
4) GP receives the response and can either refer the patient on to specialist services as usual, or start the appropriate treatment themselves.
5) GP then closes the conversation on the system and the written record of the advice is entered automatically on the GP electronic patient record.

A&G system can therefore help:
1) Facilitate quicker access to the appropriate mental health care
2) Improve the knowledge, skills and confidence of GPs in dealing with more complex mental health conditions.
3) Improve waiting list times for patients who do need to be seen by specialist Mental Health services (by funneling some of the less complex referrals into the A&G platform instead).
4) Promote more joined up care across organisational boundaries i.e. primary care and secondary care services.

The platform was launched in October 2019, in Lancashire and South Cumbria NHS Foundation Trust, in Lancaster & Morecambe. The A&G platform represents a major transformation in how we deliver mental health care to patients in primary care – traditional channels of care have been via GPs making formal referrals to Mental Health services. A&G has been used in some acute hospital trusts, but there is nothing published about its use in a mental health setting elsewhere in the UK. Therefore (to our knowledge) this is the first significant use of this model of care in a UK Mental Health service.

– 75% of GPs found the A&G system “easy to use”.
– 75% of GPs felt the advice they had received from psychiatrists was “useful” or “really useful”.
–  53% of GPs using the A&G system changed what their planned treatment on the basis of the advice received.
– 68% of GPs said that they would have made a formal referral to Mental Health services if they hadn’t had access to the A&G platform in this case, compared with only 29% after A&G was implemented.
– None of the GPs would have managed the care of the specific patients themselves prior to the introduction of A&G, compared with 43% after having received the guidance via the platform.

There was no evidence of a change in waiting list times demonstrated as a result of the implementation of A&G Qualitative findings Interviews were held with all the psychiatrists who were providing the clinical advice, as well as a selection of four GPs who were using the system to request advice. A selection of benefits was identified by GP and/or psychiatrists:

Overall, both groups found the system valuable and easy to use, and were keen to see it continue. Suggestions were also made by professionals to further improve the system such as creating a “Frequently Asked Questions” on clinical topics that the GPs could access, and expanding the system to add other professionals providing specialist advice such as mental health pharmacists.

Whilst the project has not yet demonstrated a reduction in waiting lists in Mental Health services (possibly because the analysis was done shortly after deployment), the other benefits have shown the system to be a key method of improving care for patients, in a way that is easy for, and supported by professionals. Since this initial implementation, two other services have also gone live with the same system (Older Adults Mental Health services in Lancaster and Morecambe, and rheumatology services in Preston), and more interest has been expressed by other clinical teams who would also like to implement A&G.

There are several key learning points which have arisen from implementing this project. They are as follows:

– Ensure the system is designed with stakeholders – when any new system is introduced, particularly if it requires staff to work differently it is vital to proceed with a “co-production” mindset. Often, new technologies are implemented in a top-down manner without adequate consultation. This can lead to feelings of resentment and then disengagement, which may then affect the success of the implementation even if the idea itself is a positive one. In addition, the end-users of the system will understand their existing workflow best and will be able to suggest realistic and workable changes to the future-state. This will improve the chances of successful deployment. In this project we engaged the psychiatrists from the earliest stages, and were able to work through their concerns about impact on workload in a constructive way. They themselves came up with solutions and the project felt as though it was genuinely co-owned.

– Don’t forget other key stakeholders – one of the challenges that we faced early on in deployment, was around the confidence and input from administrative staff who are a key part of ensuring that the processes work smoothly. As the A&G we initially underestimated how vital admin colleagues were to making the system worked, and in hindsight we should have engaged with this group from an earlier stage. We did not fully appreciate the concerns from admin staff about their workload and staffing levels early enough, and this led to some gaps in the process and difficulty in meeting agree Key Performance Indicators. One we uncovered and addressed these concerns, the processes became smoother, there was less resistance, and admin staff felt supported and listened to.

– Consider a “soft launch” rather than a big bang approach – when a new system of work is introduced this can lead to some anxiety in the end-user team about the impact on workloads. In the Mental Health service where A&G was deployed, even though staff felt positive about the change, there was also some apprehension about managing what was perceived to be additional work. This was considered by the A&G project team, and a decision was made to “switch on” the new system with some brief communication to GPs in the area about the new platform. This allowed a “soft launch” approach which resulted in a gradual increase in traffic, rather than a deluge which was the fear. This allowed the mental health service to get used to the system, and to iron out any teething problems with minimal impact and disruption for patients or staff. Further more comprehensive communications have since been disseminated to publicise the system now that it has bedded in within the mental health team.

– Be realistic about the timeframes for benefits realisation – The initial vision was that this platform would reduce waiting lists for patients that have been referred to Mental Health services, due to some referrals being funneled into the A&G channel. This has not yet been evidenced by the figures, possibly because the analysis was done too soon after deployment to have an impact. However, a number of other benefits (both quantitative and qualitative) have been identified as per the previous section which has clearly demonstrated value to both patients and staff. Therefore, when commissioning a service like this it is important to have realistic expectations of what benefits may be realised, and the timescales within which to expect them. It is also worth considering non-cash-releasing benefits, and how this might be captured through other means which may be equally valuable it terms of quality and experience.

This project has been shortlisted for a HSJ 2020 award in the category of “driving innovation through technology” as can be seen here. The learning has also been shared with another Mental Health NHS Trust (North East London NHS Foundation Trust), who have also subsequently deployed a similar system. 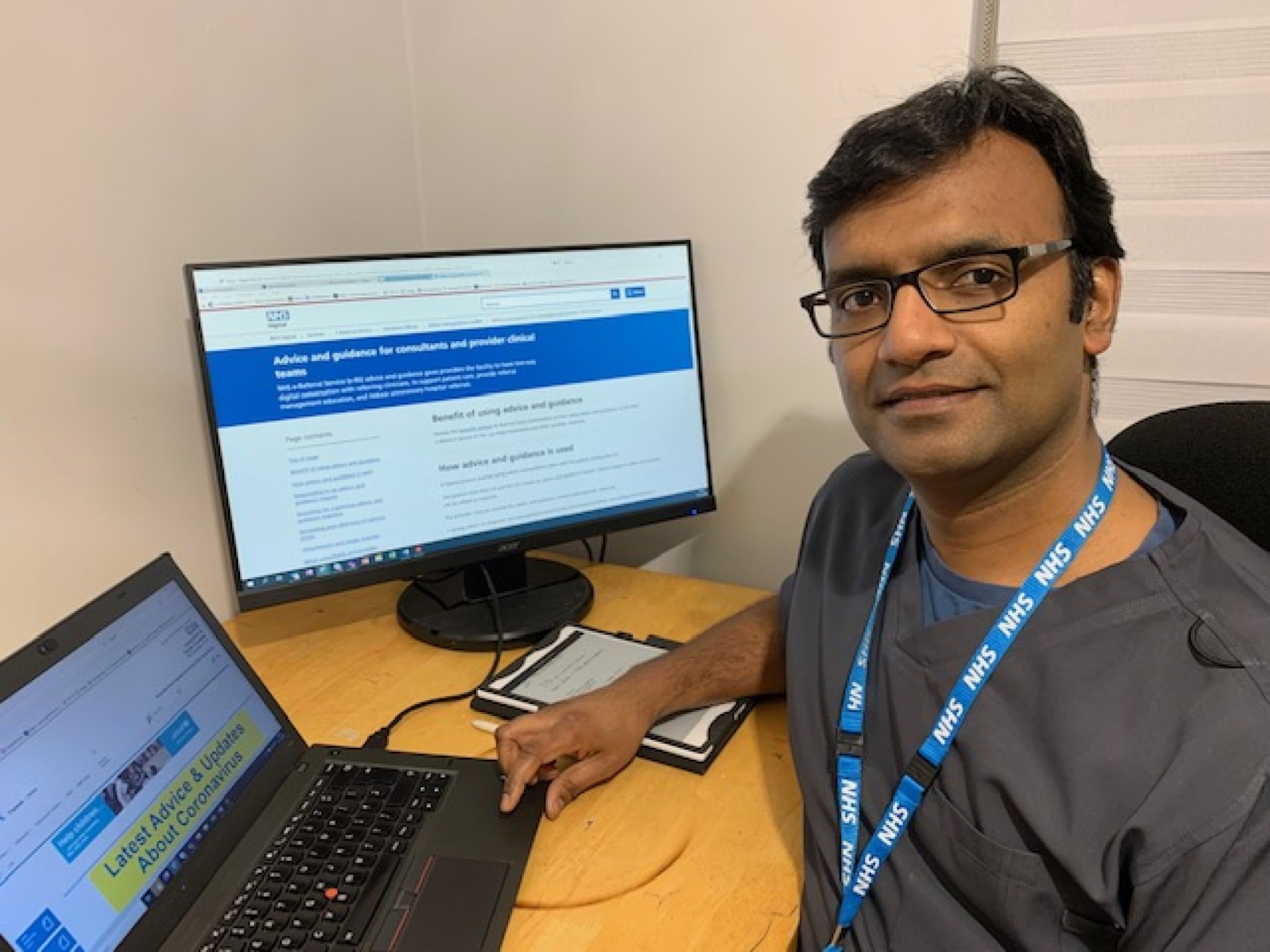