Public Health Intelligence has developed a Toolkit for Quantifying the Burden of Alcohol-Attributable Harm at a Local Level for use in the Licensing Application Process in Tameside. 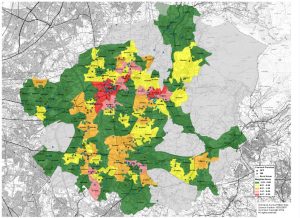 • The prevention of crime and disorder

• The prevention of public nuisance

• The protection of children from harm.

The toolkit developed by the public health intelligence team provides a consistent contribution of public health to the licensing process and is used to screen every new license application received by the licensing department. Where an issue is identified with the locality of a licensed premises the toolkit provides an evidence base of intelligence to support a representation against the provision of a license or to impose restrictions upon the issuing of the license.

What makes this initiative remarkable?

The developed toolkit is innovative and unique and we don’t think anything similar or as robust has been developed elsewhere. The toolkit is now used in Tameside council for every licensing application that is submitted. It uses a suite of indicators that match all four licensing objectives and is a complete evidence base to use during the decision making process. It has been widely recognised as a useful toolkit outside of Tameside and was presented at the 2015 annual Festival of Public Health where it was well received. We have had several enquiries from other councils who are looking to develop something similar in their council. Public Health England are now also interested in developing it further into a national toolkit.

What has the project achieved?

1. It is used consistently for all Tameside council licencing applications

2. It is simple to use with a map that highlights areas across the borough that have high to low alcohol harm and a dashboard of indicators that are timely and robust.

3. Other councils are interested in developing a similar dashboards

4. Public Health England are interested in developing it further as a national toolkit