Trafford Innovation and Intelligence Lab was established in October 2014 to get the most amount of value out of data that exists about Trafford. By bringing together huge amounts of data, the intelligence 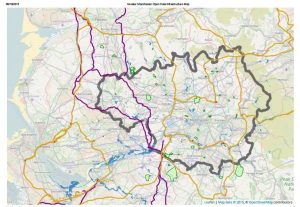 created is hugely powerful for decisionmakers, such as public health. Wherever possible, data used and generated is made available as open data. Data and intelligence is articulated in was that are easy to understand, and engaging. The lab also has an eye on technology – being aware of and considering what emerging technologies are likely to provide opportunities to aid better use of data. This can be anything – from web-technologies to drones, and virtual reality headsets to sensor arrays (internet of things). The final, and arguably most important aspect of the Lab, is the commitment to sharing all elements of the lab’s work – through social media (tweeting and Facebook), blogging and newsletters, and most importantly face-to-face – welcoming visitors to speak about the work of the Lab, and speaking at many data-related events.

What makes this initiative remarkable?

The Lab’s whole approach is extremely innovative, and unlike anything seen in local government across the country. Driven by individuals who are passionate about data, the Lab’s work is aimed equally at allowing service managers to understand services better, and empowering the community to understand and use data. This is done using a range of techniques – creative data visualisations that allow people to interact with data in different ways, engaging talks about specific themes, and data surgeries where Voluntary and Community groups (and anyone else) can drop in and chat about data – from availability and interpretation of data, to data literacy advice. The range of achievements below are testament to the quality of the work being undertaken.

Coupled with this is a willingness to share everything learned in the process of working with data. All tools are open source, data is open, and knowledge is freely distributed. Not only do Lab staff actively make these things available for others to use – they work hard to show other organisations how to do this and articulate, with passion, the benefits of using data well. All of this is intended to increase the overall level of date use and release as far as possible.

What has the project achieved?

Open Data Camps 1 and 2 -The Head of the Lab is a co-founder and organiser of Open Data Camp – a 2-day unconference bringing together people from all over the country, from all sectors, to discuss open data. the first was in Winchester, in February 2015, and the second in Manchester in October 2015. Both events were an incredible success, and there will undoubtedly be more to come.

Open Data Champions -Trafford was named open data champion by Francis Maude MP in March 2015. A great honour, allowing the Lab to build on its open data work,& gives validity to its attempts to encourage open data across the country.

Open Data Surgeries -Supporting VCS groups by helping them use open data to support bid applications, & evidence the impact of their work.